If you are an enthusiastic boater, you will know that a lake without water is just like a pub without beer. Quite surprisingly, Lake Eyre Yacht Club’s members are used to this kind of dry spells. At times, it might turn two years in between their outings but there isn’t anything like the strong flood of north Queensland to put wind to the dusty sails. 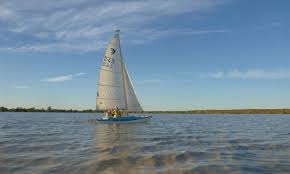 In Marree, the outback town, the yacht club has a headquarter. Here, the ice cold tinnies are opened up and huge floating tinnies are put into action for toasting the swelling rivers in the thirsty desert of South Australia.

Bob Backway, the club commodore has said that the volume of water which brings relief to the channel country might eclipse 1991 levels. He says that if they are able to get 2 m then they can sail on the lake instead of where Warburton River is flowing in. In case the basin is filled completely, people will be able to go out sailing for a week and will require a compass in order to make their way back home.

The yacht club which had been established in 2000 deemed Marree the best meeting point for two hundred and fifty international, as well as Australian members who like an adventure. Maree is the central point of outback since it is the junction of Oodnadatta and Birdsville tracks which is far from Strzelecki Track.

The clubhouse is situated on the shed that is highly renovated. They lifted it for making it two-story. This was made for creating a storage for the boats underneath. Thereafter, they added a ramp for launching so that it looked just like the yacht club and gave the feeling of home. There isn’t water at the bottom but they have photos showing water everywhere when it rained in 2010. It appeared as if the tide had come in.